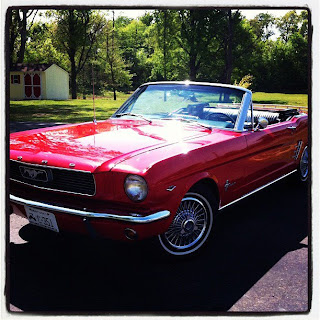 Hugh is a 1966 Ford Mustang Convertible.  He has factory air, black Pony interior (all original) and a black top.

He is Signalfire Red.

He came into my life roughly 80% restored, but a couple long drives let me know he was overheating badly.  A new radiator fixed that, and since then, my hubby and I have been slowly working on replacing little parts here and there that need it.  A new radio (like really new, that I can hook my iPod to, but that looks just like the original) was one of our favorite purchases, because the cassette player that was in him just wasn't doing it for me.

He needs new paint, but that's a project for some time far in the future.

Right now we are slowly working on restoring him, little by little, so he will be perfect and like new again.

And he turns heads wherever we go.

MJ & Hugh want to hear from YOU!